JOIN US at Pack Expo Las Vegas! Register for FREE using our unique code. Visit us at Booth LS-6631 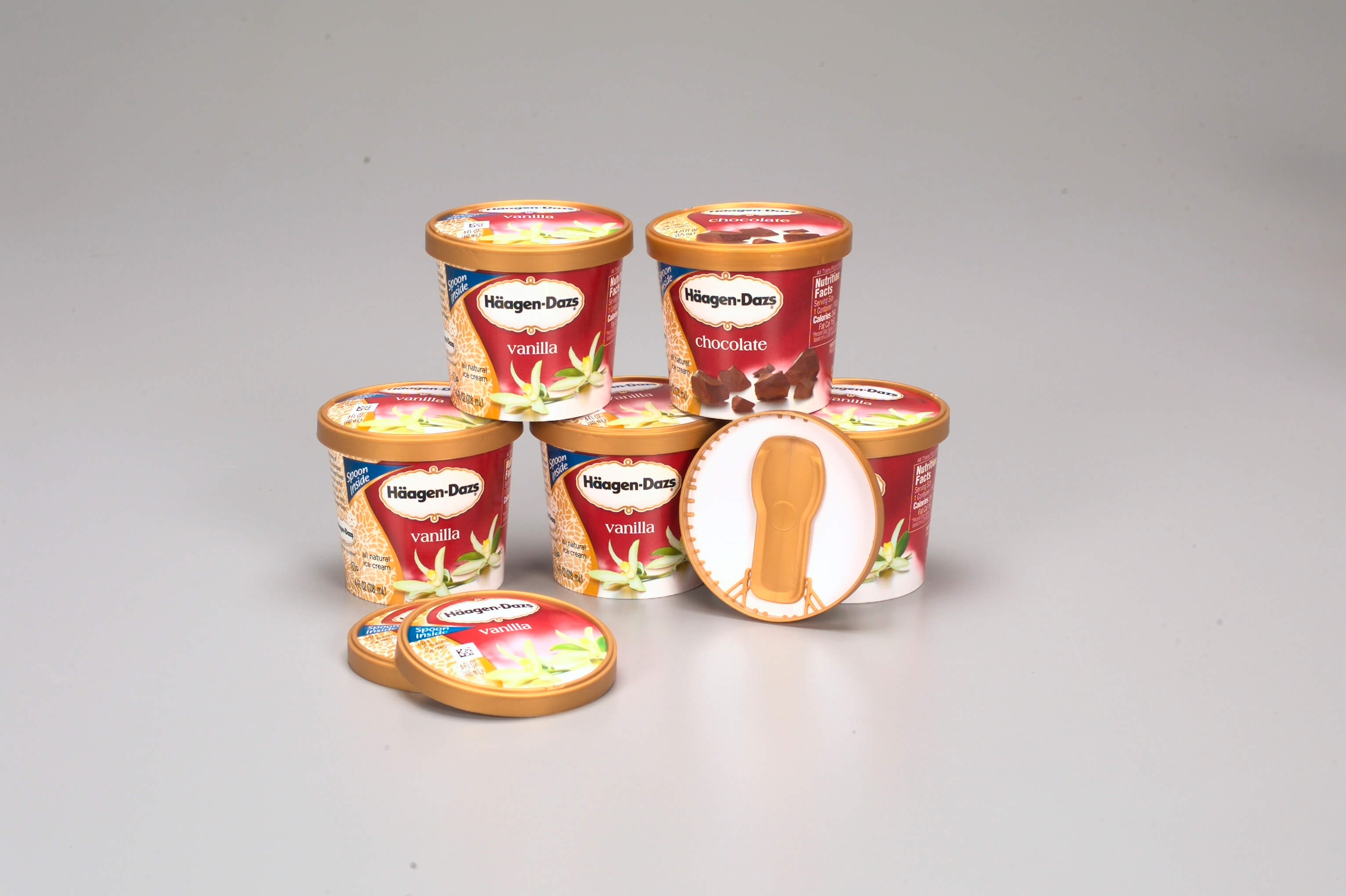 Double H specializes in composite lids; combining an injection molded rim with a printed paperboard insert for the purpose of bringing together exceptional graphics with the function and fit of plastic.

One of the benefits of this technology is the ability to create packaging with additional functionality; like a utensil, on the underside of the lid.  The most popular utensil is a “Spoon Lid” for Ice Cream & Frozen Dessert. It’s currently offered in two main sizes, to fit 3.6 ounce and 8 ounce cups, and has been in the market for over 10 years.

Consumers are making more and more food and snacking choices based on convenience, and new and innovative packaging can continue to add value.  With the utensil integrated into the lid, there is no need for a secondary spoon; which is especially helpful away from home.

Whether it’s portion control or a way to reduce costs, some packages have been downsized so these single serve items don’t need a lid for reclosure.  The lid is now utilized as a way to deliver the spoon.

While the addition of the spoon as part of the package provides convenience, it is important to note that the food grade plastic should not affect the taste profile of the ice cream.  Nothing compares to a real spoon, but for consuming on the go, the plastic spoon is preferred to a wooden spoon option.

Typically, a heat seal membrane is applied once the cup is filled and before the lid is applied. This keeps the spoon clean during distribution and also serves as a form of tamper evidence. From a manufacturing perspective, the lid and heat seal can be applied inline.

The spoon is easily removed from the underside of the lid, rigid enough to use with frozen desserts, and made from a recyclable food grade plastic.

The spoon lid has grown in Ice Cream and Frozen Dessert, but the same concept can be applied in other markets.   Similar spoons can be used with edible cookie dough and other savory snacks.  Additional designs include a spork for prepared meals as well as a utensil for spreads.

Adding a functionality within the primary packaging allows the consumer to enjoy more products in different ways; in this case, on the move.  Whatever the usage occasion, adding a utensil can add immense value to the packaging and the brand.

Double H is excited to be exhibiting at Pack Expo International in Las Vegas. With new innovative products to showcase, we hope you’ll stop by!

Tamper-evident packaging has been around for a long time but is now more of an expectation, not an exception; specifically, in retail food packaging.   Looking more closely at Ice Cream & Frozen Dessert brands, tamper evidence is becoming more and more prevalent.

This is being driven by the retailers and ultimately the consumers as they look for the best possible products. A package that offers some form of tamper evidence is going to provide some additional reassurance.

Not only does this added feature serve the consumer in terms of feeling confident in the integrity of a product, it also assists retailers to ensure that they are filling their shelves with untouched and safe products. While there are many different forms of tamper evident packaging, the goal of safety and security is consistent across the board.

The term “tamper-evident” refers to a device or process that makes unauthorized access to a protected object easily detected. The idea is that some kind of action has to be taken to the package, whether it be to pull a tear band or break off a plastic tab, in order to be able to open or access the contents with ease. The tearing or breaking off of a piece of the container would then serve as the indication to the consumer and/or retailer that this product may have been tampered with and may not be safe for consumption.

As defined earlier, “tamper-evident” doesn’t necessarily just refer to one process – as long as it protects the product from unauthorized access then it can be considered to be tamper evident. The most common types of tamper evidence within the retail frozen desserts and ice cream segments are: a heat seal or membrane, a secondary shrink band, or functional packaging.

Commonly referred to as a freshness seal, the membrane is applied directly to the cup as part of the filling process.  It typically requires special equipment but the membrane can be printed and offers brands another chance to convey their message.  The consumer would remove the overcap and heat seal prior to consuming.

Like the seal, the shrink band is a separate component but applied after filling in a secondary operation on a specialized piece of equipment.  The clear plastic band can also be printed and would be removed by the consumer in order to access the contents.

Unlike the seal and the band, functional packaging incorporates a tamper evident feature into the cup or lid by way of a tab to break or band to remove.  In either case, there is a permanent change to the packaging which would indicate tampering. The packaging tends to be more complex but removes a secondary step from the filling process.

What this Means to You:

There are a number of proven options available for ice cream and frozen dessert packaging to incorporate some form of tamper evidence.  Each situation is different so brands should consider all options and make a decision based on what works best for their product, process, and Consumer. 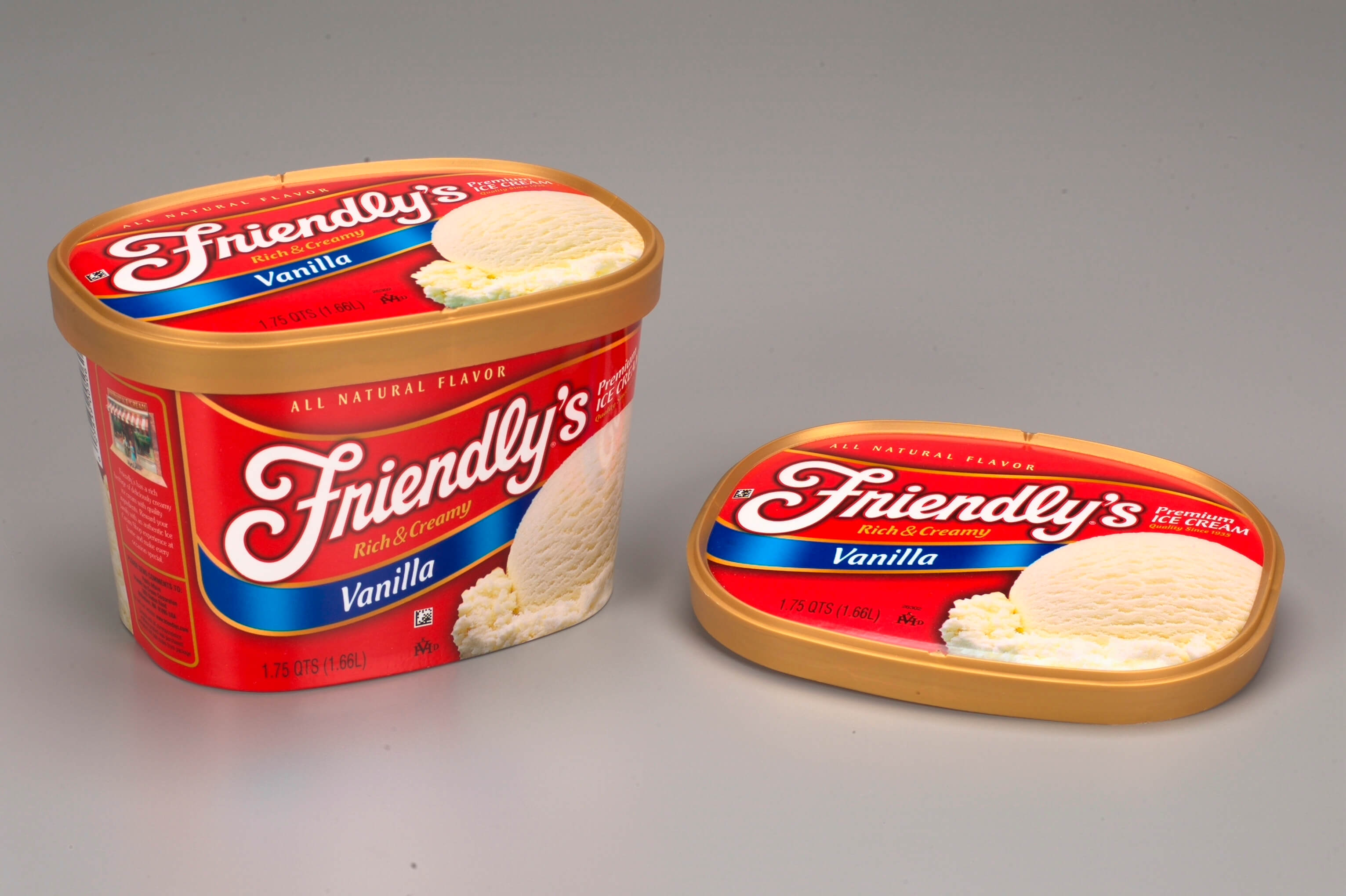 Composite, by definition, means “having many elements.”   Generally, the composite lid joins an injection molded rim and a printed paperboard insert for the purpose of combining exceptional graphics you would expect from paper with the function and fit of a plastic lid.  Composite lids have historically been used with oatmeal canisters, ice cream containers, dry soup products and yogurt cups.

Double H started making composite lids in 1985 after purchasing the VersaForm technology.  Thirty-four years later, Double H has made the composite lid the cornerstone of its packaging business; producing lids in two locations, Warminster, PA and Marion, IN.

There have been many changes over the years to provide solutions for opportunities in the market.  From early overcaps and plug styles to a recent lid with an integrated spoon, the composite lid can come in many forms but the goal is the same, to provide a better fit and look.  Most recently, Double H launched a tamper evident composite lid.  With the tamper evidence built in, the brands can remove a step in the manufacturing process without sacrificing safety and quality.

Composite lids can be designed to partially open and re-close, to have a separate utensil, to have a “window” or use printed plastic inserts in place of paperboard for even better product visibility.

A composite lid is stronger than an all-paper lid, holds up better in distribution, and does not tear or separate on the shelf.   The paperboard insert can be enhanced with:  embossing, de-bossing, foil stamping, special inks or coatings. The insert can be reverse printed with direct food contact inks for printing recipes or coupons and can have game pieces or separate printed inserts attached.  Think: contests, specialty market info, and promotion of additional products!  The frame of the lid can also be decorated to designate new or limited-edition flavors or special offerings as well as the option for a range of unique frame colors.

Double H Plastics is a manufacturer of Plastic & Paperboard Packaging that services industries such as Ice Cream & Dairy, Consumer Products, Cereals, Convenience Foods and Pet Care.  Through a unique injection molding process we use paperboard inserts and a variety of plastic resins to mold custom packaging solutions.  This process allows for exceptional graphics and superior functionality in a wide array of shapes and sizes.

Next Page »
site by Think it First